It’s not a species commonly found among the maple, birch, cedar and white pines of northern Michigan. But on this 311-acre property known as Ziibimijwang Farm, few of the newly-planted seedlings are.

“I don’t think it’s been too cold for them yet,” Jansen said as a group of volunteer tree-planters prepared to tuck the saplings into the soil.

Jansen and his colleagues at the Little Traverse Bay Band of Odawa Indians have planted thousands of trees since the tribe purchased the property in 2013, transforming it into a small-scale experiment in girding northern forests against climate change.

Along with the shagbark and silver maple, there’s black walnut commonly found in southern Michigan, sassafras and swamp white oak that typically ranges only as far north as mid-Michigan, and a host of other species — about 30 in all — that Jansen hopes will become the feedstock for a diverse, climate-resilient forest.

“I don’t know which of these species are going to thrive in 50 or 100 years,” said Jansen, the tribe’s conservationist. “So we cast the net broad and try to have something there that creates habitat for wildlife, sources of cultural significance for tribal members and areas to hunt and gather.”

Intermixed with the species foreign to this area, crews on the property — about nine miles southwest of Mackinaw City — have planted more familiar northern species, such as white cedar and paper birch, using seeds drawn from trees at the very southern tip of their range. He hopes the cedar and birch will tolerate warmer conditions, buying time for two species that climatologists have cast as “climate losers” destined to lose footing in Michigan as the earth warms. 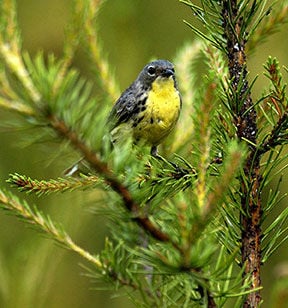 LANSING – Bird enthusiasts from around the world travel to northern Michigan in hopes of catching sight of a Kirtland’s warbler, a small songbird once poised on the brink of extinction, according to the Department of Natural Resources (DNR).

Now the species is thriving thanks to decades of effort by a diverse group of dedicated partners. Due to the species’ remarkable recovery, the U.S. Fish and Wildlife Service last week announced that it no longer warrants protection under the Endangered Species Act (ESA).

“The effort to recover the Kirtland’s warbler is a shining example of what it takes to save imperiled species,” said Margaret Everson, principal deputy director of the Service. “Truly dedicated partners have worked together for decades to recover this songbird. I thank them for their efforts and applaud this historic conservation success.”

“The Kirtland’s warbler was one of the first species in the United States to be put on the federal list of endangered and threatened species, and today’s action by the U.S. Department of the Interior marks the latest chapter in a remarkable wildlife success story,” said Michigan Department of Natural Resources Director Dan Eichinger on Tuesday, Oct. 8. “The bird’s recovery provides dramatic testimony to what conservation organizations, governments and businesses can accomplish when they come together for the good of the resource.

“We are grateful for the partnership of U.S. Fish and Wildlife Service and U.S. Forest Service in this effort. I sincerely believe conservation is a team sport, and today’s announcement is a big win for natural resources in Michigan and for all those involved.”

Historically, wildfires were the most important factor for establishing the natural jack pine forests that Kirtland’s warblers need for breeding habitat, according to the DNR. Modern wildfire suppression greatly diminished the natural disturbance that once generated Kirtland’s warbler breeding habitat. In the absence of wildfire, land managers had to take an active role in mimicking natural processes that regularly occurred within the jack pine ecosystem. This is primarily done through large-scale timber harvesting and human-assisted reforestation.

Today, the sale of jack pine timber on sites where reforestation will occur is critical to managing Kirtland’s warbler breeding habitat. Timber receipts offset the cost of replanting jack pine needed to support a viable population of nesting Kirtland’s warblers that would not otherwise be feasible through conservation dollars.

“Private forest owners are proud partners in this major milestone and committed to the long-term health of the Kirtland’s warbler,” said Dave Tenny, founding president and CEO of the National Alliance of Forest Owners. “Private forest owners are an essential part of conservation success – 360 million acres of working forests across the country are privately owned. We proudly work with the U.S. Fish & Wildlife Service and conservation partners to develop and implement smart management decisions that support a wide range of wildlife across the country.”

“Collaborative conservation is an effective way of protecting at-risk species and their habitat because it creates a common focus around a shared objective for government agencies, private landowners and the broader conservation community,” said Craig Seaman, senior investment forester, of Timberland Investment Resources, LLC, which manages working forest investments in Wisconsin. “This is another example of how conservation without conflict can produce positive outcomes and we congratulate all those involved, and especially the U.S. Fish and Wildlife Service for leading the effort.”

Kirtland’s warblers were among the first animals in the United States identified as being at risk of extinction. The species nests only in young jack pine stands in Michigan, Wisconsin and Ontario. It overwinters in the Bahamas. Populations dipped to a low of 167 pairs in 1974 and again in 1987 before starting a steady climb toward recovery.

Prompting the warbler’s slow but steady ascent were long-term efforts by partners such as the Michigan Department of Natural Resources, U.S. Forest Service and conservation groups to conserve young jack pine habitat and control brown-headed cowbirds, a primary threat to the species. Cowbirds lay their eggs in warbler nests and larger cowbird chicks outcompete their warbler nest mates, causing the warbler chicks to die while the unwitting warbler parents raise the cowbird imposters.

Year after year, a stalwart group of partners ensured habitat was available and cowbirds were controlled. Due to their efforts, the Kirtland’s warbler population steadily rose. Numbers reached more than 1,000 pairs by 2001, expanding beyond the northern Lower Peninsula to areas in Michigan’s Upper Peninsula, Wisconsin and Ontario. Currently, the Kirtland’s warbler population is estimated to be more than 2,300 pairs, more than double the goal identified in the species’ recovery plan. The population has exceeded recovery goals for the past 17 years and continues to increase and expand its range.

The Kirtland’s Warbler Breeding Range Conservation Plan was developed in 2015 and is now the guiding management strategy for the species. Additionally, funding and other commitments to habitat management and cowbird control are in place to ensure continued conservation actions in the absence of ESA protections.

By Al Parker
It might seem out of place, and it certainly lives under the radar of tourists and locals alike, but Grayling’s W.J. Beal Tree Plantation might be the oldest documented experimental tree plantation in North America.

Situated inside the city’s industrial park and surrounded by the daily bustle of commerce, this placid, historic green space, on many days, is seen only by delivery truck drivers and workers who rumble along Industrial Park Road, unaware of the significance of the towering pine trees they pass.

“This site might be the only one in the country where reforestation has been so well documented and preserved over more than 100 years,” wrote Frank Telewski, a Michigan State University professor of plant biology, at the site’s dedication in 1997.

Once 80 acres, the site is now only about 5 acres, but it’s filled with towering pine trees that stand as testament to the foresight of William James Beal, a bearded, burly, and bold visionary who taught botany and horticulture at the Michigan Agricultural College (MAC), now Michigan State University, from 1871 to 1910. A pioneer of what came to be called “The New Botany,” Beal extolled independent learning through observation.

“In the 1800s we did not know how to grow and plant trees,” said Susan Thiel, a now-retired Department of Natural Resources Forest Manager who managed the Beal Tree Plantation. “Professor Beal did vast experimentation across several different sites to learn how to collect seed, plant and germinate it, and grow trees of different varieties. This site helped develop the science of growing and regenerating trees and reforesting sites as we know it today.”

Beal’s Grayling Agricultural Experiment Station offered unique promise: Its 80 acres came courtesy of the Michigan Central Railroad Company, which had donated the “wild land” to MAC — land that had been cut and exposed to fire, which left a scattering of random jack pines and oak root sprouts. The Grayling location became the “base substation,” wrote Beal “because the area’s climate and conditions would represent the average — neither the best nor the poorest of the sterile land.”

Moving quickly, Beal supervised the cleaning and preparation of the ground. A barbed wire-and-board fence was built to keep cattle and animals away, while a 5-foot strip of ground was plowed along both sides of the fence to deter fires from entering the property.

By May of 1888, Beal had directed the planting of 2,145 seedlings, which came from W.W. Johnson of Antrim County. The seeds were planted in 14 rows, each row precisely four feet apart. Along the north side and south sides, 20 acres each were designated for agricultural experiments.

Beal would not have long to watch his seedling and saplings grow; in 1891, Beal was relieved of his work at the plantation and was replaced the following year by Dr. O. Palmer.

In 1997, an inventory was taken; it showed that of the 41 species started as seedlings or seeds in 1888 and 1889, no hardwoods survived. But original stems from seven of nine conifers endured, mostly red pine and white pine. They stand there still today, silently and majestically greeting visitors to the Beal Tree Plantation.

The plantation is open to the public, free to enter, and features a handicap-accessible path for visitors to explore. There are a few weathered signs that offer information, a couple of benches along the needle-strewn path, and limited parking. Find a map at www.michigan.org/property/wj-beal-tree-plantation.

An insect responsible for the loss of much of the eastern United States Appalachian region’s hemlock trees has found its way into Michigan. The hemlock woolly adelgid poses a threat to the state’s valuable hemlock stands. A call to action by citizens may be the most realistic path to further detection and control.